It was a season unlike any other for the 412 teams this fall in the NVTBL. Facing a global pandemic and new safety protocols, coaches and players took on the challenge of youth sports in 2020 and overcame its obstacles with patience and perseverance that resulted in one of the most rewarding and important seasons of their lives. 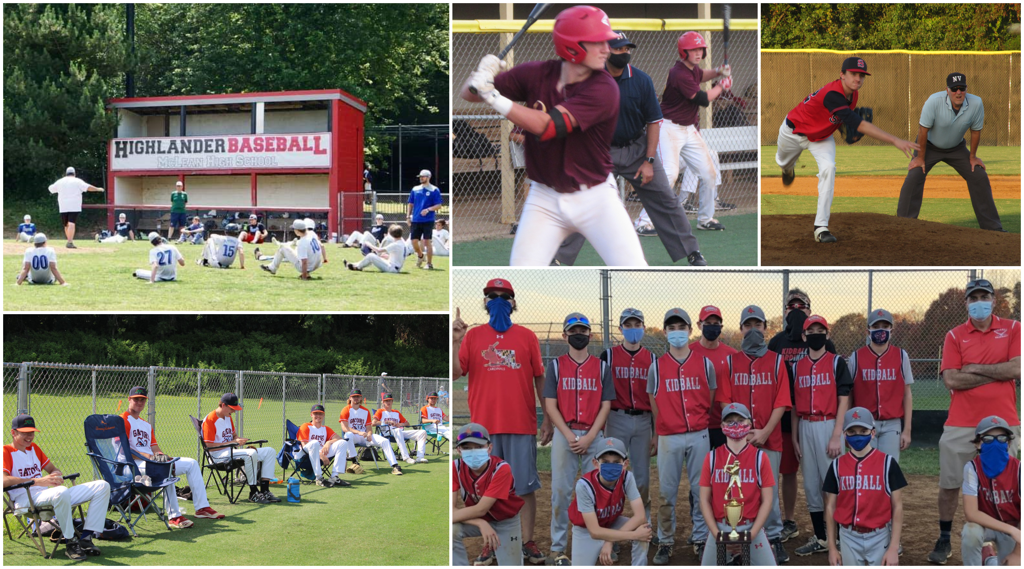 Teams adjusted to a number of COVID protocols this fall, including keeping 6-ft apart, bringing their own chairs to games, wearing a mask and adjusting to umpires out of position among many others. Photos courtesy of NVTBL & NVCL.

Baseball never felt better this fall for the over 400 teams who participated in the NVTBL. After a cancelled spring season and a limited summer slate, the league was back in full capacity this fall as diamonds across the region were once again filled with smiles and cheers.

To keep players, coaches and parents safe at practices and games, the league implemented a number of safety protocols including but not limited to keeping players spread out on and off the field, teams not sharing baseballs and disinfecting them when they leave play, having umpires socially distance behind the pitcher’s mound and home plate area and closing the bleachers for families unless a mask is worn. Self-screening documentation also had to be completed and collected for every coach and player before any team event.

The coaches faced an uphill battle developing players while managing the COVID-19 pandemic, safety protocols and a new sports environment where Clorox wipes are being used more than a fungo. It was a challenge unlike any other, but was faced head on by coaches league-wide with assistance of a “COVID” coach.

With additional hoops to jump through, the league recommended each team add a staff member to help manage the waivers and compliance of safety protocols to allow coaches to focus on the players. For many head coaches, these COVID coaches became their favorite person this fall.

Despite new league safety protocols, the game remained the same. When the umpire yelled “Play ball,” the outside world became mute. For those few hours, the game provided a distraction from the scary reality occurring worldwide and domestically and allowed kids to be kids for the first time in months. It’s the reason why this season felt more important than any other to so many.

Greg Crawford is highly involved with the NOVA Royals organization as a general manager as well as coaching junior varsity and 10u teams. This season had a huge impact on him and his players being able to get a sense of normalcy back in their lives and return to playing the game they love.

“This season in many ways meant more to me than any other just what we have gone through as a country,” said Crawford. “To have the ability for two hours to go out and play baseball and block everything else out in the world meant a lot and just being able to put a smile on these kids faces. I think the thing that was interesting was just how much baseball meant to these kids. In many ways, this was their only opportunity to get outside and to be around other kids.”

The biggest obstacle for Crawford, other than finding a method of keeping a mask on a 10-year-old, was adjusting to social distancing while coaching. It was tough for him to not give a high-five after a nice play and he felt the impact of its absence.

“That's part of coaching, that's part of the human connection. And I think that it's easier to tell a 15-year-old we're not going to be doing that. They get it. But a nine-year-old with a smile on their face after they just got a game-winning hit or made a big play is running off the diamond and they want that affirmation. It's kind of heartbreaking at times but over the course of the season they understood it.”

It took some time for players to also get accustomed to the new way of doing things in 2020, especially for the younger age groups. Many got more comfortable with the protocols and mask wearing as the season went on, though it remained difficult to keep their distance from their teammates after a nice play.

The “air” high-five became a popular alternative while some got more creative with “cleat-fives.” Regardless of their method, it was an adjustment that was worth getting used to.

“It was kind of hard to wear a mask and not fist bump someone when they did a good job,” said Jeremiah Maita, who plays on Crawford’s 10u team. “We are definitely grateful to play. We had to spread out and wear a mask and socially distance. It was hard but we had a lot of fun this year.”

For families, it meant everything seeing their child laugh and enjoy the game with their friends again. Many reached out to NVTBL’s director Rob Hahne to thank him and the league staff for leading the way for the return of youth sports and organizing a structure where teams can continue to play and stay safe. Each family had a unique story and perspective on the importance of what baseball brought to them this fall.

“Thank you for helping give my boys some normalcy. Baseball was an escape from the four walls of our house. I got to see my kids smile and laugh. I saw some baseball highlights too,” wrote one family.”

“We moved here a year ago. Without the NVTBL, my kids would have had a really tough time meeting new friends in a new area with remote school. I’m eternally grateful they had the chance to play baseball this spring and summer. It’s made all the difference in them getting acclimated to the new area. Thanks again for making it work. As you know, it’s much much more than the game.” wrote a father.

“Thank you beyond words that you tried so hard to give our boys the opportunity to go out and play baseball. It was a bit of sanity and normalcy for them and us, as we are dealing with the current everyday madness,” wrote a mother.

“My 80-year-old parents were able to watch their only grandson play baseball another season and that meant so much to all of us,” wrote another family.

“It looks and feels like baseball and was an escape on a lot of levels. I think the season has meant more to these kids than any other,” said Crawford. “In many ways we're closer now than we've ever been because we got to have this experience together. I am proud of them and I thought the season itself was a big success.”

Despite the distraction of doubleheaders and night games, the reminders of the current reality remain. Umpires are out of position, huddles are spaced out and beach chairs are an extension of the bench. The future and how long we have to manage the COVID-19 virus remains uncertain, but the baseball community in Norther Virginia has proven that it can come together to allow the game to continue to be played.

“I think that there's a lot to be commended for,” said a 12u coach. “We've proven as a collective community that baseball is one of those things that we can get done in a safe manner. We were operating in a tough environment and doing so safely so I think that gives us every reason to feel confident that we will be even better when we're operating in a steadily warming and more inoculated environment.”

As teams head into the off-season with a season of protocols and safety procedures under their belt, the spring season and the outlook of local youth baseball is viewed with more optimism. For now, the future looks a bit more bright. And that feels good to say.