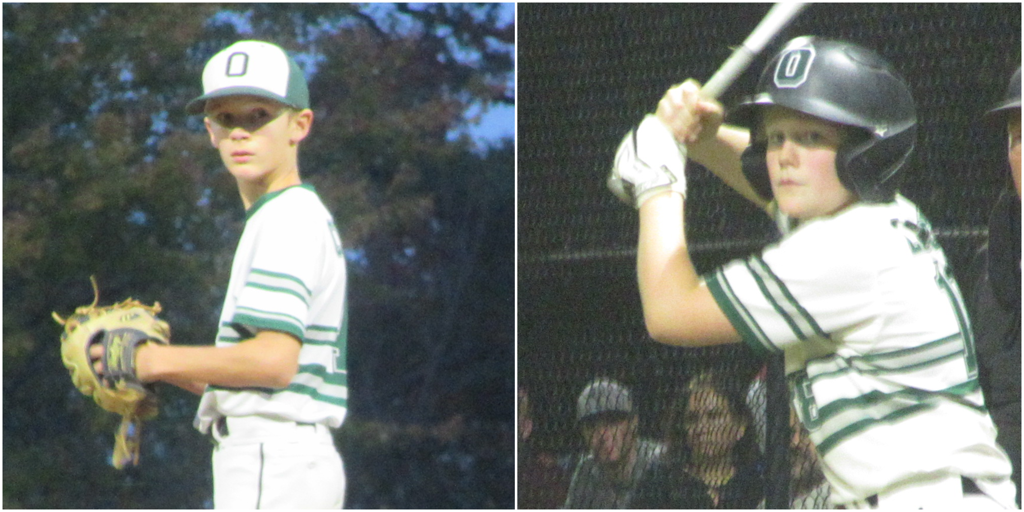 Will Coblentz (left) threw 3 scoreless innings in relief while Brennan Lengel (right) drove in the only run for the Outlaws. Photo by Josh Belanger.

Brennan Lengel drove in the only run of the game and four different pitchers combined to toss a one-hit shutout for the Mizuno Outlaws Black 14u in a 1-0 win over the Arsenal Baseball 14u last night at Greenbriar Park.

Edwin Gaulding started on the mound for the Outlaws and retired six of eight batters he faced. Will Coblentz then came on in relief to start the third inning and proceeded to toss three scoreless innings, allowing just one hit.

Mark Zonavetch was the starter for the Arsenal and was dominant out of the gates. The left-hander retired the first seven batters of the game and struck out seven over four innings. The Outlaws eventually got to Zonavetch in the third after a walk to Wesley Beeland and a base hit from Gaulding set up the RBI opportunity for Lengel, who took advantage of a pitch up in the zone with two strikes.

“I missed two pitches but then at the end [of the at-bat] the pitch was a little high but I was able to reach out and get it and pull it through the gap,” Lengel said.

Brady Millar and Gary Ahrens followed Coblentz and each tossed a scoreless inning with a pair of strikeouts for the Outlaws as each stranded runners in scoring position. Ahrens escaped a hairy situation in the seventh with a strikeout to end the game after consecutive walks with two outs brought the top of the order to the plate for the Arsenal. The Arsenal was never able to get the offense going, leaving seven men on-base throughout the game.

“They really pitched well. We have a tournament this weekend so that is why we had to switch out so many pitchers,” Lengel said. “At the end, I was a little [hesitant], but our pitcher was able to pull it off and we didn’t make many errors, if not [any].”

Arsenal reliever Ryan Beck came on in the fifth inning and started a key double-play to keep the Outlaws from adding to their lead by stabbing a ground ball hit up the middle and tossing home to get the runner trying to score. Catcher Riley Sagana then made a bullet throw to second base to get the third out of the inning.

The best scoring opportunity for the Arsenal came in the fifth when Jay Horton attempted to score on a suicide squeeze with two outs, but the third out was recorded when Coblentz fielded the bunt and Gaulding dug out an errant throw in the dirt to end the frame.

The Outlaws’ fall season will conclude at the Halloween Havoc tournament in Fredericksburg this weekend while the Arsenal will play next against the Prime Time Aces Navy on Friday before playing their final doubleheader of the season against the Shenandoah Sluggers Gray on Saturday.