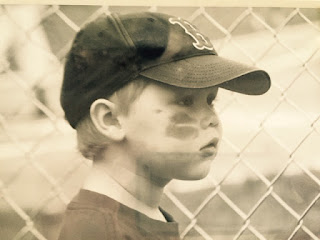 Well, who woulda thunk it, baseball fans? As of this morning, we have 2020 World Series Champion. In my own life, my son's fall baseball season is coming to a close, which is awesome because I wasn't sure it was going to come to an open. Since the pandemic forced the cancellation of the spring season and shortened the summer season, I am immensely grateful that we got it in at all.

Even with all the new rules and Covid protocols, our fall season actually went off without a hitch. After the longest and most boring spring of all time, it got really busy around here. My 15 year old son, Drew, had a few out of town tournaments, practice three days a week, and strength training four mornings a week. I had loads of laundry to wash, stand-still traffic on I-95 to sit in, and even a few stale-smelling hotel rooms to spray with Febreze.

Before I knew it, life seemed almost back to normal.

Last week I spent more time in the car than I did anywhere else. In addition to making a 14 hour round trip to Knoxville and back to Northern Virginia with my college sophomore, our baseball schedule was particularly packed. We had a Sunday round trip to Richmond and back for a double header. That added four hours to my road trip tally. We got home from that to receive the schedule for the next weekend's tournament.

We were scheduled for a 8:30 pm game on a Thursday night at a stadium two and a half hours away from home. That meant we wouldn't be home until after 1:00 am and Drew had school the next day. Then we had practice scheduled for Friday night an hour away from home. To top it off, we had a 7:00 am arrival time for two games on Saturday all the way back at the same stadium from Thursday night. If you're doing the math with me, we're talking somewhere around 7,432 hours in the car - give or take. (And perhaps, some questionable parenting.)

As I sat in the bleachers with some of my baseball mom friends telling them the nightmare schedule we had drawn for the weekend, one asked, "Are you going to all that?"

Huh? I hadn't thought about that option for some reason. The reality was that I didn't have to go. My husband could do the trip with my son alone. I could bail out of at least one or maybe even all of the games. I could stay home and get some work done. Or I could just sit in my pjs with a glass of wine and a chick flick on tv.

But in that moment I looked out at my 15 year old high school sophomore crouching behind the plate and saw this: 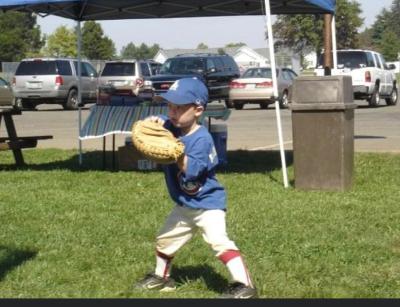 This third boy of mine? He waited so long for his turn. From the time he was three years old until he was issued his very own tee ball uniform, he wore mismatched baseball clothes pulled from his brothers' drawers pretty much every single day. He memorized the batting stance of every player on the 2010 Boston Red Sox lineup when he was five. (His Kevin Youkilis was uncanny.)  He looped his sticky fingers through the chainlink fence to watch his older brothers' at-bats. He stood behind the backstop imitating the umpire's movements. 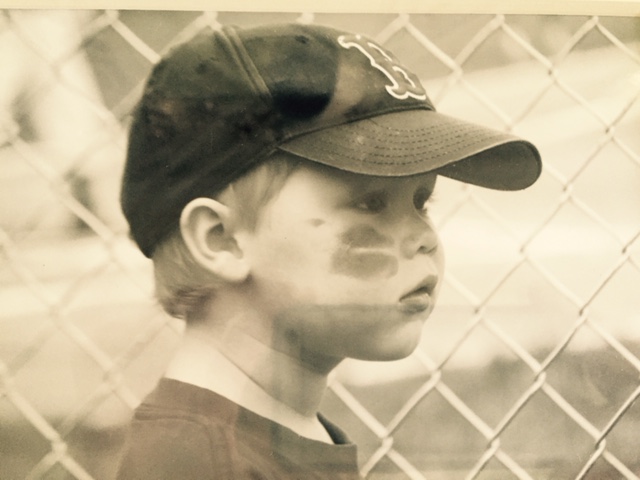 One time, when he was about five years old at somebody's game, he climbed up a tree along the first base line, sat high up in the branches, and heckled the opponent's coach when he was complaining about a call. Our friends still laugh remembering how that poor coach looked around wondering who was making fun of him. (Again, not great parenting, I guess.)

He ran the bases after every game. He hitched a ride on the tractor to help drag the field. He stood in line for his medal when he was the bat boy. 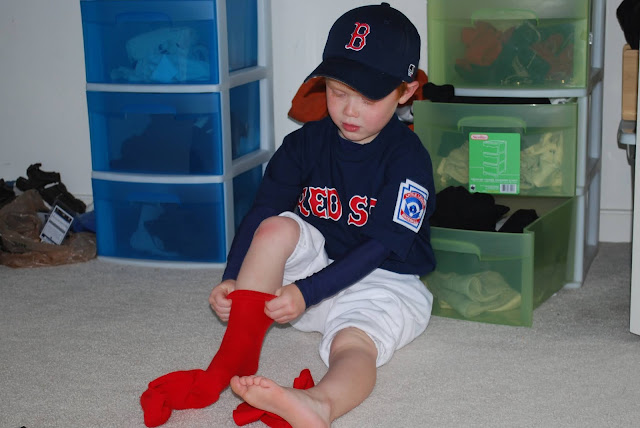 Two of my ball players went and grew up on me and hung up their cleats. And I will continue to be each one's biggest fan, cheering for them in everything they set out to do.

But I've still got one guy left to watch play. I know I will blink and the reddish-brown clods of dirt will have disappeared from the floor of my car. I won't need to add the jumbo tub of Oxiclean to my grocery list anymore. I won't have to stop by the ATM as often to be sure I have cash for the gate fees and the concessions.

To be clear, I'm lucky my schedule is flexible enough to allow me to attend most of my son's games. I don't think a mom is good or bad based on how often she sees her kid play. I also know that I might bail out on a game next season or next week or even tonight. Frankly, I don't think my son cares all that much whether I'm there or not. He doesn't look for me in the bleachers or ask me what I thought of his throw down to 2nd base.

But I watched how a final season was snatched out of the hands of so many kids and their parents this year, so whenever possible I will make the trip. I'll roll my eyes and complain about the schedule. I'll glance frustrated at my watch and wonder why in the world the coach has to talk for 30 minutes after the game when we have a two hour trip home. I will fill the gas tank and make the hotel reservation at that basic Hampton Inn that sits right off the highway one more time. I'll drive through whatever crappy fast food place he wants me to after the game. I'll pull in the driveway at 1:15 am on a weeknight and crawl into bed knowing we have to get up in five hours.

Because this guy waited his turn. And his turn won't last forever. For me, he is the last man standing (or crouching, if you will). I'll follow him wherever I can, whenever I can. 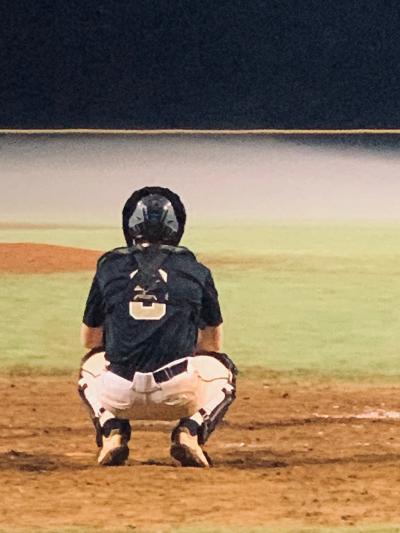