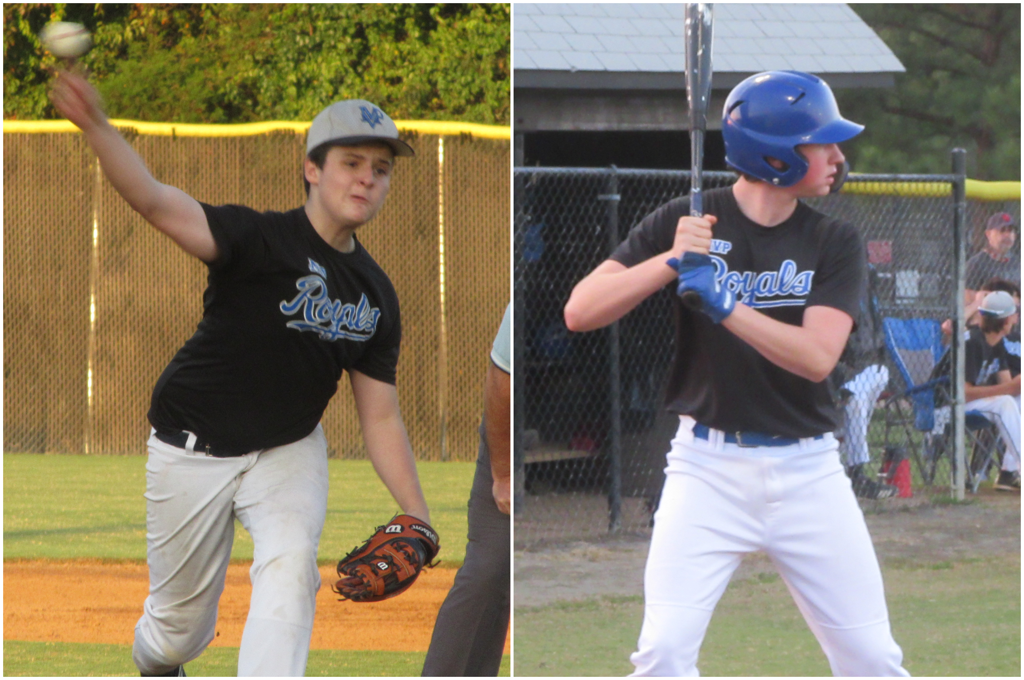 Kyle Riner (left) allowed 1 run over 4 innings while Charlie Barsotti (right) drove in 2 runs for the Royals in a 6-4 win. Photos by Josh Belanger.

Charlie Barsotti, Aiden Smith and Jayden Phillips each drove in a pair of runs while Kyle Riner struck out five while allowing just one run over four innings to lead the MVP Royals Choice 2023 over the Springfield Sharks Blue, 6-4, in a junior varsity matchup last night at Centreville High School.

Barsotti delivered a two-run double to deep left-center field to put the Royals on the board in the first inning. The Sharks answered with a run of their own in the bottom half on a sac fly from David Swim, but that is all they would get against Riner.

After allowing the first two men to reach and an early run for the Sharks, Riner proceeded to retire nine of the next 10 batters, five via the strikeout. The right-hander allowed just two hits and stayed away from hard contact with his ability to throw his off-speed in any count.

“Kyle has been great. He is always lifting us up, not only on the field but in the dugout,” Barsotti said.

The Royals added to their lead in the third inning against Sharks’ starter Will Derasmo with a two-run single from Smith. Derasmo was charged for four runs (two earned) on four hits over four innings.

In the fifth inning, Phillips provided what turned out to be necessary insurance runs with a two-run double to left field off reliever John Notte. Barsotti, who came on in relief of Riner to start the inning, allowed an unearned run in the fifth and then loaded the bases in the sixth on two walks and hit batter.

After a couple of wild pitches brought home two more runs and advanced the tying run into scoring position, coach Tony Felt went to reliever Vishal Green. Despite inheriting a sticky situation, Green was able to retire the final batter via a ground ball and secure the win for the Royals.

The Royals will be in action next against the Brambleton Blue Birds on Wednesday while the Sharks will face the Replay Rangers on Saturday.