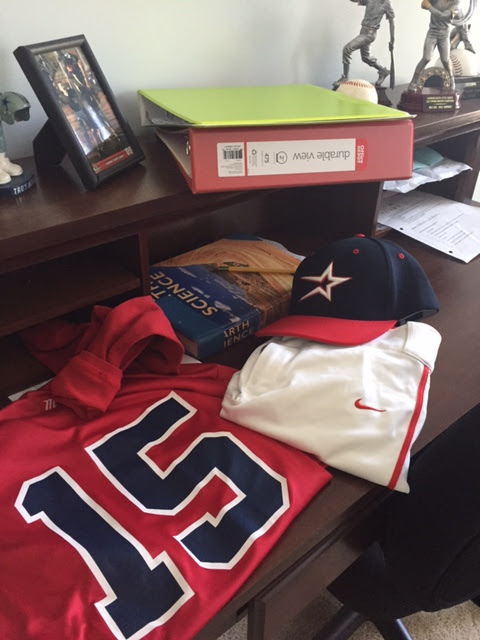 September is Childhood Cancer Awareness Month. I really only came to know that about seven years ago because of the brave fight of a number of children in our area including Gavin Rupp, who was a a 13 year old Northern Virginia baseball player whose team played in the NVTBL. I've written about him here before. So enormous was his journey's impact on our baseball community and on me, personally, that I imagine I will continue to write stories about him for as long as my fingers can type.

In June of 2013, the NVTBL put out a call to action on its social media platforms for the support of  Gavin. He was battling brain cancer and his family had just heard the news that there were no more adequate treatments available for him. Thus began my more in depth understanding that cancer wasn't a disease reserved for adults. As a mother of three young baseball players like Gavin, I was deeply affected by his story and by his passing only six weeks later.

Today would be Gavin Rupp's 21st birthday. Some of the boys who prayed for him in the summer of 2013 have gone on to play college baseball. Some are working on degrees and looking toward a future with hopeful anticipation. There is no doubt that each of their lives will be forever marked by knowing him or hearing about his brave fight, as mine has been.

This column is dedicated to baseball. But for those of us who have been around the sport for a long while, we know that baseball is about more than hitting a ball and catching a ball. Baseball is about people, community, and relationships.

I wrote the following piece in 2015, only two years after Gavin passed. The hole he left here remains and time, unfortunately, does not heal all wounds.

There is much to mourn in 2020. Today,on Gavin's birthday, the NVTBL hopes that you could make room in your heart to pray for all of the children affected by Childhood Cancer. And then take a few minutes to mourn a young man whose fight on and off the ball field taught us lessons too numerous to count. No matter the mess that we find ourselves in this year, today is a gift. Show up for it and leave it all on the field. Gavin Rupp sure did.

Well, it's Thursday.  In social media circles this is the day where people post old photos of themselves, family and friends. Some go way back causing those of us who were teenagers in the 80s some serious shame and regret.  Some show photos of college parties or weddings.  Most - at least in my circle of friends - are posted by parents of their children.

We remember the awe of peeking at pink newborns swaddled tight.  We giggle at toddlers with cake smeared on their faces on 1st birthdays. We zoom in on baby faces, looking for familiar traces of the teenagers who tower over us now. We lament the lightening quick passage of time, commenting, "How did she grow up so fast?" and "What happened to this little pudgy toddler?" and "This baby is going to college?!"

In theory, I could choose a Throwback Thursday photo of my children from last year, last summer or even from last week.

But, what if as each day passed, my options for Throwback Thursday grew farther and farther in the distance?  What if I had no choice but to scroll down weeks, then months, then years to find a photo of my child?  What if I didn't have a new photo to compare to my old photo?  What if all of the images of my child stopped at age thirteen?  Or five?  Or  two?

This question stirred my heart at Curefest this past weekend - a national gathering to raise awareness for pediatric cancer which took place in Washington DC.  This reality hit me hard as I walked among throngs of grieving families after spending most of my summer away from fundraisers and awareness events.  Time had marched on for me, for my children, and for the world around us.  The question nagged me, Does time, in fact, heal the wounds of my friends?

I'd like to think it does.  I'm pretty sure it doesn't.

On the National Mall last week, tents and tables set up for cancer awareness organizations from across the country stretched out as far as I could see.  Shining faces and gleaming smiles of hopeful children stared out at me on posters and on t-shirts, on brochures and on buttons.  Many were photos of triumphant survivors.  Still, countless more were "throwback" photos of children lost - last month, last year or many years ago.

And as I looked out at all of these children - all of them important and vital and missed - I tried to put myself in the position of the precious parents I have met on this journey.  I wondered about them as they left to go back to their neighborhoods and schools to stand among parents like me.  Parents with Iphones poised to capture important milestones, goofy selfies and momentous events - new experiences to stash away for a Throwback Thursday far in the future.

What if there would be no more League Championships?  No more first days of  practice or school? No driver's test? No SATs or college choices? No graduations?  No weddings?

And then this:  What if as the years marched on there would be countless more children following in my child's place?  More diagnosis.  More death.  More funerals.  More fundraisers.  What if each child gone might get lost in a sea of others?  What if I felt like the image of my child had become blurry and frayed around the edges?  What if I felt like he was being forgotten?

Honestly, I don't have the answers to these "what ifs".  As a mother of healthy children, unless something like this befalls my family (and it could), as compassionate and present as I might try to be, I simply will never understand the depth of this pain.  No matter how many of these parents I meet and how many with whom I chat, I will never know.

So what can I do?  What in the world is there to do?

Yesterday, as I was mulling over these thoughts in preparation for this post, I went to put away the laundry of my 14 year old son. He has grown old enough for baseball games that don't end until 10:00 pm and to study math problems that are over my head.  He has grown old enough to make his own dinner and wash his own clothes and stay up later than me.  My boy is certainly old enough now to not need his baseball jersey, hat and pants laid out for him by his mommy.

When I picked up his jersey out of the laundry basket, I noticed his new number.  He wears the #15.

In the dark early hours of a July morning in 2013, I made a promise to another young boy who once wore the #15.  A boy I had never met, but whose face and family had consumed my thoughts that entire summer.  His name was Gavin Rupp and he had passed away due to brain cancer at the age of thirteen mere hours before. Today - Throwback Thursday - is Gavin's 16th birthday.  As I held my son's #15 jersey, I knew what there was to do.

Today, Gavin's birthday will be a day for remembering and rejoicing for his life and weeping for its loss.  Today I will remember Gavin.

This Throwback Thursday, I will lay out a new jersey for a new #15 and I will not forget a boy who wore #15 before.  The image of Gavin and the lessons his life taught me are in sharp, clear focus in my mind and heart today.

We will not forget you, Gavin Rupp.  We will rejoice for you and we will weep for you.  We will hold your family in our hearts today.  Happy Birthday, Buddy.