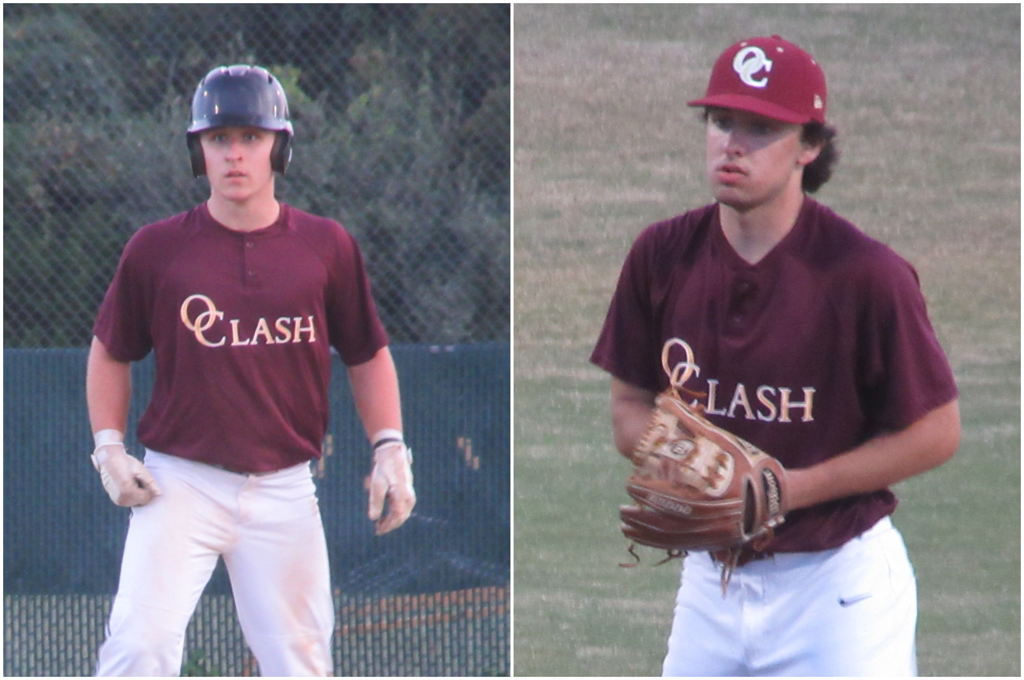 Will Dornbusch (left) and Spencer Schwartz (right) each drove in a pair of runs to lead the Clash to a 9-5 win. Photos by Josh Belanger.

The Oakton Clash sent 15 men to the plate in the third inning, scoring nine runs on four hits while also receiving plenty of extra help from six walks and three errors, to beat the Westfield Maddogs, 9-5, in a varsity match-up last night at Westfield High School.

The Maddogs were in control early as starter Nick Lottchea (William & Mary commit) retired the first six batters in order, due in large to a pair of slick pick-off moves in the second, and the offense scoring three runs in the first inning behind RBI from Jonny Farmelo (UVA commit) and Jason Cheifetz (JMU commit).

Kevin Mackmin was scheduled to take the mound for the Maddogs to start the third inning in relief of Lottchea, but after fouling a ball of his right knee in his previous at-bat was removed after throwing one warm-up pitch. Sam Marco was called on to pitch on short notice and struggled with command, walking three of the first four batters.

After the Clash took the lead on a pair of unearned runs and a RBI from Spencer Schwartz and Ethan Jones, Will Dornbusch delivered a two-run single to break the game open. The Clash would tally four more runs in the inning, capped by a bases-loaded walk from Schwartz to drive in his second run of the inning.

“We were just feeding off each other,” Dornbusch said. “One base hit turned into another and it just kind of spiraled.”

Lottchea and Farmelo combined to reach base five times in six plate appearances and were responsible for four of the Maddogs’ five runs. Farmelo finished the night 2-for-2 with a run scored and a pair of RBI. Kyle Hahne also had a nice night pitching out of the bullpen for the Maddogs, tossing two scoreless innings.

The Clash will be back in action against the South County Mustangs on Tuesday while the Maddogs will look to rebound next against the MVP Royals Prime 2021 on Wednesday.