Well, baseball fans. It finally happened. Our boy had an actual-real-live-honest-to-goodness baseball game this past weekend. In the days leading up to it, I was almost too nervous to put it in writing on the calendar because of the possibility that it would vanish into thin (rainy and/or virus-filled) air again.

The last time I had watched a live baseball game was on March 11th. That night we returned home from my son's second high school scrimmage to find that due to the coronavirus pandemic, the NBA was shutting down and school had been canceled for the next two days (which quickly turned into the next three months). Since then we watched them fall like dominoes - the NCAA season, the College World Series, Little League, the MLB season, Summer College Leagues, and of course, our son's high school season. With each cancellation I felt like my heart was being ripped out of my chest and crushed with a bat.

(If you're new here, now might be the time to give you a heads up that I tend toward the dramatic.)

Anyway, two weeks ago we were finally supposed to play, but we got rained out. So due to that heartbreak, I was hesitant to count on us playing this past weekend. Fortunately, we did play. The sun shone and the games were on. We loaded up the truck with the bat bag, the packed coolers, and the chairs and set off to meet up with our old trusty companion known as "Standstill Traffic on I-95".

As we drove, I thought about these past few months when there was not a thing on the calendar for my youngest son - no practice, no hitting lesson, no catcher's clinic, no game. My two oldest boys normally attend college out of state. Both were supposed to be busy with internships this summer, including one who was to be working as a broadcaster in the Cape Cod Summer College Baseball League (cue the sad trombone music). They both came home from their campuses in March and all of their plans were canceled as well. So it was, that on just about every last one of those wide open nights, our family of five sat around the dinner table together. As I often have in the past few months, I thought about what a truly unexpected gift it was.

I think when I look back at this time, although I'll lament all the things we lost (and all the meals I had to cook), I'll cherish having all three of those knuckleheads around the table. While that might sound a little Beaver Cleaver-ish, I can assure you that June and Ward would not be thrilled with the general atmosphere at the Skinner table. Dinner time with my husband and my 21, 19, and 15 year old sons does not a tranquil evening make. There is often a lot of spirited discourse (i.e. ear-splitting arguments) and good-natured taunting (i.e. brutal smack talk).

Sometimes, it got too loud and too contentious, but most of the time I loved it. Many nights those "conversations" would center around our memories of season after season of spring and summer nights spent at the baseball field. As the boys recounted their favorite moments, I was stunned at how clear and detailed each of their memories were of so many seasons past.

We talked about the summer we took the whole family to see the Sox at Fenway Park for the first time and watched Jacoby Ellsbury hit a walk off Grand Slam. 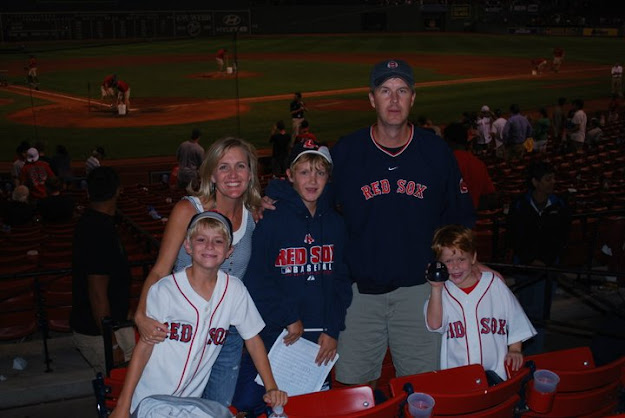 We remembered the time Kyle got to play a game on the field at Nats Park in the Kyle's Kamp Memorial Day tournament. . . 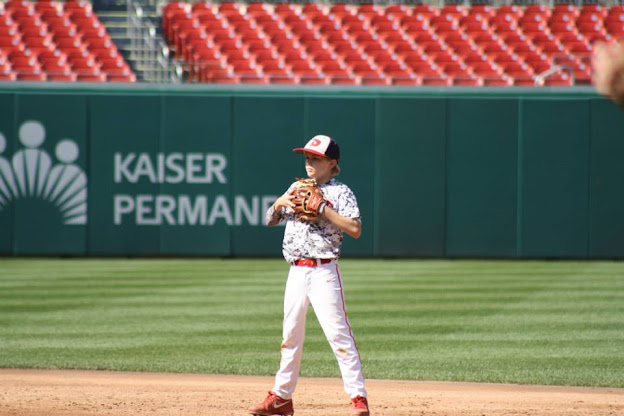 . . . and the day Drew hit his first homerun ever causing his teammates (and his mama) to lose their ever-lovin' minds over it. 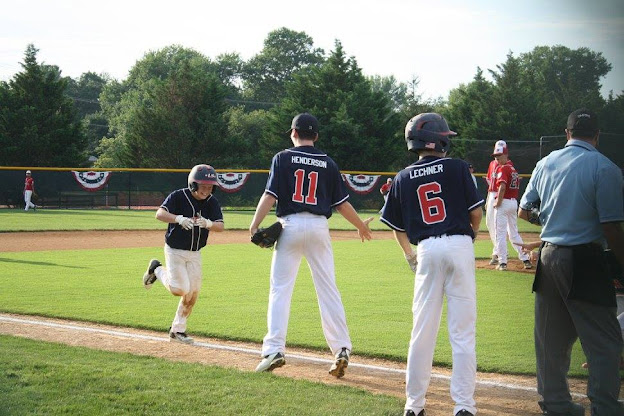 We remembered the very first Little League Championship we celebrated with Joe . . . 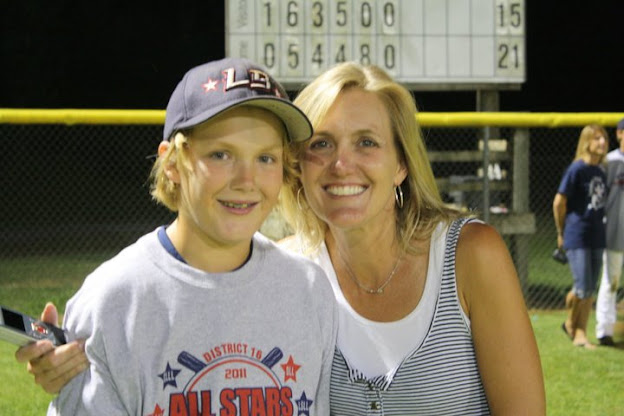 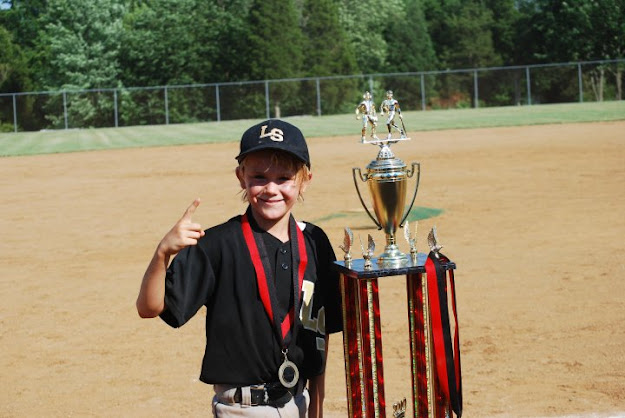 The boys talked about the coaches who had meant the most to them, both on and off the field -  those who could be serious enough to teach them meaningful life lessons and silly enough to celebrate a heckuva great season with them. 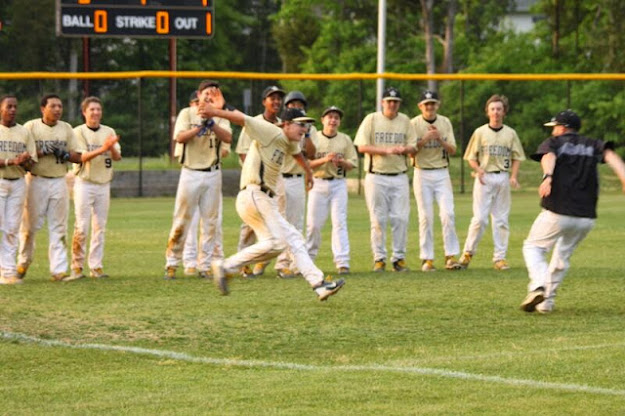 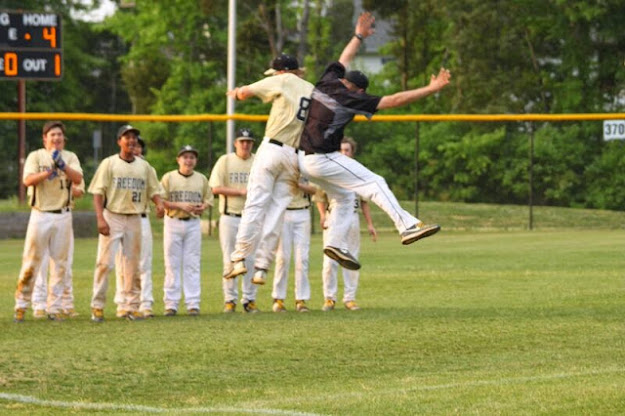 . . . and we remembered the time the most stubborn coach of all - their Dad - went against the advice of nurses and doctors to show up to coach third base in the Middle School Championship only a handful of hours after his knee surgery. Using a fungo bat for a crutch, he convinced his players to keep watch so that his frustrated wife was locked out of the dugout and then they went ahead and won the darn thing just to spite her. 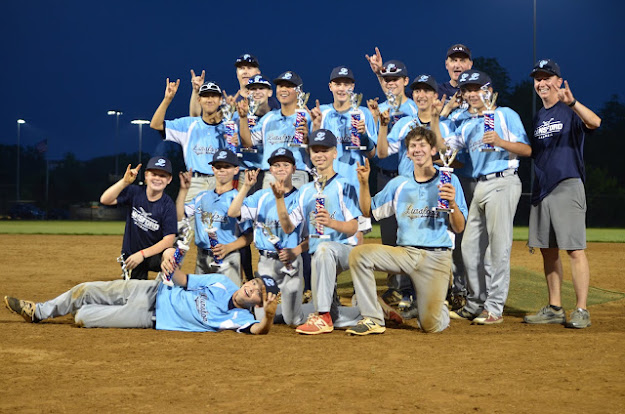 Of course, we talked about championships and amazing plays and fun times with our friends, but we also remembered those moments that didn't lend themselves to a great photo op. The opportunities lost and the silent car rides home. The misplay at short that resulted in the winning run for the opposing team. The frustrated tossing of the 2nd place medal into the trash can and how Mom had to bite her tongue and wait to talk about being a gracious loser until cooler heads prevailed. And perhaps one of our favorites: the time the younger brother struck out looking with his older brother making the call behind the plate as the umpire. Almost a decade later they are still arguing about that call.

I'm more than ready to be busy again. I look forward to setting my Waze app to find me the fastest route to the field and I hope I'll be settling in to my chair for a lot of extra innings. I've got one more ball player left in this house and I don't want to miss a minute. 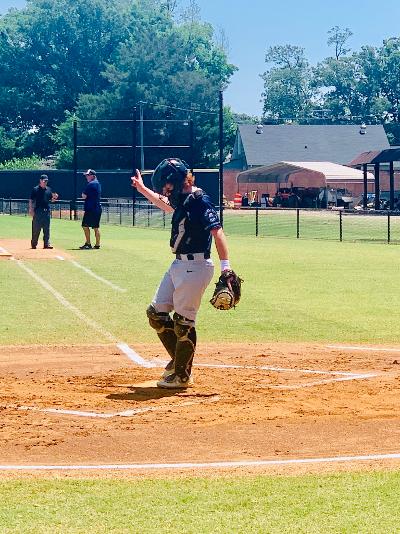 But I hope one of things that our family will have learned from this season is to take the time to slow down and give our brains a chance to remember. The quarantine gave us that chance. There was arguing. There were accusations and denials. There was shouting and joking and there was a whole lot of laughing.

There was the five of us trading stories too many to count of moments when we thought we'd just about bust out of our skin with joy. We've had far more of those moments than we deserve and we've learned in the last few months that they are not guaranteed. When I look back at the spring and summer of 2020, I'll think about all those nights around the dinner table and to steal a line from Field of Dreams, I'll recall that "the memories were so thick we had to brush them away from our faces."