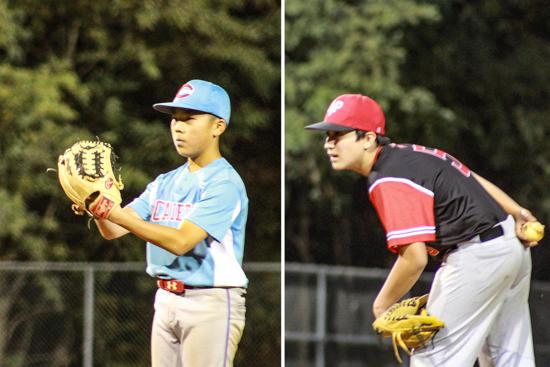 Nathan Choi - Player of the Game

Not only was the game decided in the final inning, it was decided on the final play. Jackson Bourdeau’s slide into home was cut down resulting in a game-ending double play that gave the Cadets Blue 14u a 3-2 win over the MVP Terps North 2024 Thursday night at Poplar Tree Park.

Offensive output was hard to come by for the majority of the game, as Cadets’ starter Nathan Choi tossed five innings of shutout baseball, allowing just two hits.

“I felt great,” Choi said. “I just pounded the zone with fastballs to see what would happen.”

“Straight from the first pitch of the game he was throwing strikes,” Cadets coach Mike Binns said. “Defense played great behind him. That’s sort of been our issue this year – walking batters and not playing defense on the backside but Nathan did his job and the defense was phenomenal.”

Bourdeau took over in relief for the Terps in the sixth, surrendering a single to Cadets’ Jamie Coates to begin his outing before retiring the next three batters in order.

It was in the seventh where Bourdeau found trouble, when Nick Capps would reach on an error before stealing second. A walk to Choi set the table for Will Thomas’ RBI single that put the Cadets up 1-0. David Boehm followed with a 2-RBI single to give the Cadets insurance, which they would later need in the bottom half.

James Turner and James Brown got things started for the Terps with back-to-back base hits, before Bourdeau’s 2-RBI double cleared the bases and put the tying run in scoring position. Bourdeau would then advance to third on a fielder’s choice.

In the subsequent at-bat, Sean Fakhar rolled over on a ground ball to Cadets’ reliever Coates, who proceeded to make the throw to first to secure the second out. It was while the ball was mid-air that Bourdeau decided to break in an attempt to knot the score at three, but a snap throw home eliminated the threat and secured a Cadets victory.

The Cadets Blue will take on the Game Changers on Saturday in a doubleheader, and the MVP Terps will meet the Cadets Prime on Sunday.