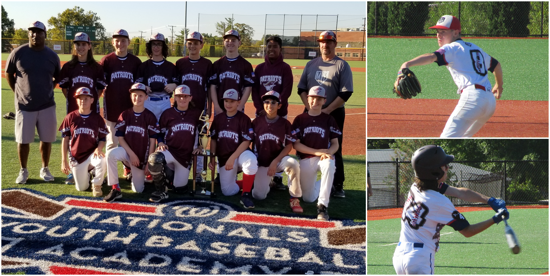 The depth of the Mount Vernon Patriots was no doubt the leading factor that allowed them to win six games in three days and clinch the 13u Columbus Day Tournament championship with a dominating 20-2 win over the MVP Terps White yesterday at the Washington Nationals Youth Academy.

After sweeping both games in the pool play round and both bracket games on Sunday, the Patriots took down the Competitive Edge, 10-4, in the semifinal game earlier on Monday. The Patriots then pounded 19 hits while allowing just four en route to a convincing win in the final of the 15 team tournament.

Tyler Orth led the Patriots with standout performances at the plate and on the mound, collecting three hits including an inside-the-park two-run home run in the first inning. He proceeded to drive in two more runs in the second inning with a double, part of a nine-run frame for the Patriots. Orth also started on the mound and held the Terps to two runs on two hits over three innings.

“Tyler is a very fundamentally sound, strong player,” Patriots coach Tucker Snyder said. “He is certainly one of our aces on the mound and when he bears down and focuses, that is the kind of job he does. Of course his bat speaks for itself and he had a great tournament.”

Noah Gizzarelli and Quinn Snyder set the table for Orth, reaching base a combined nine times and scoring eight runs from the one and two spots in the order for the Patriots. Hudson Grimsley, Evan Anderson and Logan Schmauder also each drove in multiple runs while the Patriots had seven different players record more than one hit.

“I’m proud of the work these guys have put in to be more aggressive at the plate and hit the ball where it’s pitched,” Snyder said. “We’ve got away from trying to do too much and pull outside pitches and we have been rewarded by putting the ball the other away and taking advantage of the miscues. The bats are definitely a positive aspect of this team.”

Mike Strange drove in the only two runs for the Terps with a base hit in the third inning. Scott Roland was another bright spot in the order for the Terps, going two-for-three with a double and a run scored.

Zak Ng came on in relief for the Patriots in the fourth inning and pitched three scoreless innings while allowing just two hits. Mac Halm took over in the seventh and retired the side in order to close out the ballgame.

The Patriots played flawless defense and flashed the leather to make spectacular plays on several occasions. Gizzarelli made a couple of diving grabs in the outfield while Halm slide and caught a ball near the first base dugout in foul territory to end the fifth inning and strand two runners. The Patriots also executed a two-man relay to perfection from deep left field to throw out a runner at second base.

The Patriots will be in action next with a doubleheader against the Nova Vipers on Saturday while the Terps will play next against the Shenandoah Sluggers Gray on Wednesday.