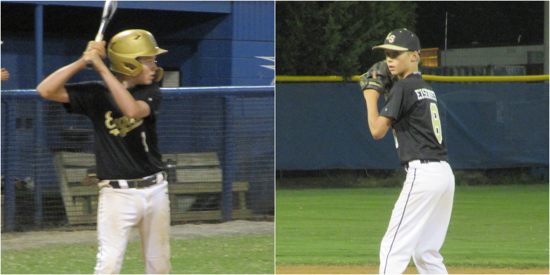 Evan Duy (left) drove in three runs on four hits while Logan Eisenreich (right) had a pair of RBI and scoreless innings in relief. Photos by Josh Belanger.

Evan Duy and the Loudoun South Eagles knew they could still win trailing seven runs with only a handful of innings left.

“Just never give up, keep on fighting,” Duy said.

Duy helped lead the charge by smashing four hits and driving in three runs as the Eagles rallied to beat the Cadets Blue, 14-11, last night at South Lakes High School.

The right-handed slugger sparked the Eagles’ offense in the first inning with an RBI double and later came around to score, leading to three first inning runs. The three-run lead was quickly squandered in the bottom of the first as the first seven Cadets reached base and scored.

Eagles starter Ryan Pugh struggled and was pulled before recording an out while reliever Gary Tomasulo proceeded to allow three consecutive hits, including a three-run double by Will Thomas. The Cadets sent 12 batters to the plate in the inning on four hits, five walks, an error and hit-by-pitch.

Thomas extended the Cadets’ lead in the third with his second double of the game, later scoring on a base hit from Jaime Lee. Rob Roncskevitz then connected on a two-run single that gave the Cadets what appeared to be a commanding 10-3 lead.

The Eagles would come soaring back with nothing but crooked numbers in the fourth, fifth and sixth innings after seven different hitters drove in runs. Duy played a major role in the Eagles’ comeback victory, having a hand in four more runs as he didn’t record an out in the game.

“[Evan] calls a good game behind the plate and is a big part of our team,” Eagles coach Tony Salgado said. “He is quite the hitter too. He is aggressive and has had a good approach all season.”

Along with a pair of run-scoring singles from Duy, the Eagles got quality at-bats from Justin Lanouette, Mattox Flatt, Logan Eisenreich, Mark Walsh and Jake Layman to vanquish the seven-run deficit and take true control of the game.

“That’s pretty much been our approach all season. We are a smaller sized team, so we have to play with a chip on our shoulder a little bit. We have a srappy bunch.”

Eisenreich came on in relief in the fifth inning and was the most effective out of all six pitchers used by the Eagles. The right-hander earned the win after not allowing a hit over two innings, allowing just an unearned run with two outs in the sixth. Eisenreich also had a strong night at the plate, going 2-for-4 with two RBI.

The Eagles will play next against the Stars Tallent on Wednesday while the Cadets will square off in a doubleheader against the Bradley Eagles.