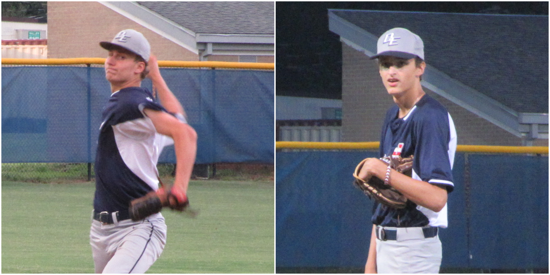 After an offensive onslaught of 29 hits and 21 runs from both teams in the semifinal on Tuesday night, the Elite utilized a combination of three different arm slots to silence the Cadets’ bats with eight ground ball outs and nine total strikeouts.

The Elite appeared to pick up where they left off from Tuesday, jumping out to a 1-0 lead off Cadets starter Dom Valis after consecutive doubles from Zach Hoenig and Matt Turk in the first inning. However, Valis quickly settled in and retired the next six batters he faced.

Rebok set the tone for the game by striking out the side in the first inning. The right-hander featured a crisp, over-the-top fastball and a changeup that yielded six strikeouts over three innings. Smith then took over in the fourth and was effective with his low, submarine release point, retiring eight of nine batters on ground balls.

“We saw the same thing we have seen all season from those guys,” Elite coach Thomas Orrell said. “Jared has a ton of movement and is deceptive throwing submarine, so he gets a lot of those ground balls. Rebok’s changeup was really working.”

In the fourth, Justin Riemer provided the only offensive spark for the Cadets with a spectacular play on the base paths. After leading off the inning with a base hit and advancing to second base, Riemer scored on a ground ball to the right side from Quinn Allen by breaking for third before the pitch. His momentum allowed him to aggressively round third and beat the throw home for the Cadets lone run of the game.

The Elite were gifted two runs on three errors in the third and fifth innings, which ultimately decided the game. Spencer Brosan came around to score from first on a combination of throwing errors while Xavier Ruley scored on a wild pitch after reaching on an error.

Weber entered the game in the seventh inning to record the save, however the left-hander had to face the top of the order for the Cadets. The Cadets were able to bring the go-ahead run to the plate following a couple of walks, however their rally ended after a double play on a strikeout and caught stealing to end the game.

“These guys work hard, play all these mid-week games and grind all summer long,” Orrell said. “To end this way feels great.”