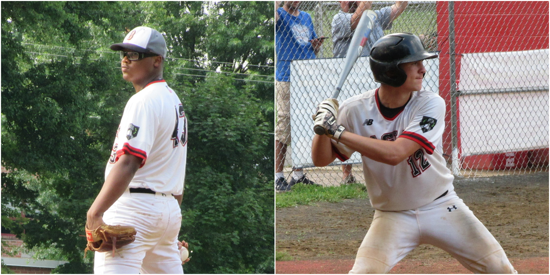 Sean Wright (left) and Andrew Timberg (right) each threw scoreless innings and combined for two doubles and two RBI for the Eagles in a 3-2 win. Photos by Josh Belanger.

As storms loomed in the skies overhead, Sean Wright provided the thunder with a two-run double in the bottom of the fifth to lift the Bradley Eagles Academic 16u to a 3-2 win over the Metro Senators 2022 last night in a PSL Futures matchup at McLean High School.

The Eagles struck first in the second inning after Andrew Timberg scored on an infield single by Xavier Grimaldi. The lone run would be all the Eagles would get against Senators starter Ryan Dunetz, who allowed three hits over four innings with five strikeouts.

The Senators were held hitless until the fifth inning by four different pitchers from the Eagles’ staff. Steve Jungers and Jackson Emery worked around three walks and an error in the first two innings while Wright dominated with a pair of strikeouts in the third and Timberg cruised through the fourth on just eight pitches for the Eagles.

“Today, we were getting ready for a weekend tournament and everybody was getting their work in with an inning,” Eagles coach Chad Carroll said. “Everybody was strike one and they took it upon themselves to take those three outs they were in charge for that inning and got it done.”

Austin Eckert finally got the Senators in the hit column with a base hit with two outs in the fifth inning after Bradley Greenberg reached on an error. The Senators then grabbed the lead on a two-run triple from Mike Della Santina. Grimaldi ultimately struck out the side to get the Eagles out of the inning, but was charged with both unearned runs.

The Eagles would answer in the bottom half off reliever Jason McGee, but not before Eckert made the defensive play of the game for the Senators. After Ryan Sim smacked a line drive to right field and headed for third base, Eckert turned and threw a laser from shallow right field to nab Sim by a step. At the time, Sim represented the tying run.

Andrew Wagner would then start a two-out rally off McGee with a walk that was followed by a base hit from Devin Perez. Wright then delivered with a screaming line drive to left field that would reach the fence and bring home the tying and go-ahead runs for the Eagles.

“We have been preaching getting the barrel out in front and being aggressive. Sean has been the epitome of that all season, crushing balls to the pull side,” Carroll said. “He came up big for us there with two runners on and two outs.”

In the seventh, Noah Potholm took the mound to lock down the save for the Eagles and quickly found himself in trouble after an error, pass ball and stolen base. The Senators were able to get the tying run to third base, however the inning came to an abrupt end when heavy rains forced the umpires to call the game.

The Eagles will be in action next this weekend in the Independence Day Classic tournament in Aberdeen, Md., while the Senators will play a doubleheader against the Hillcats Prime 17u on Sunday.