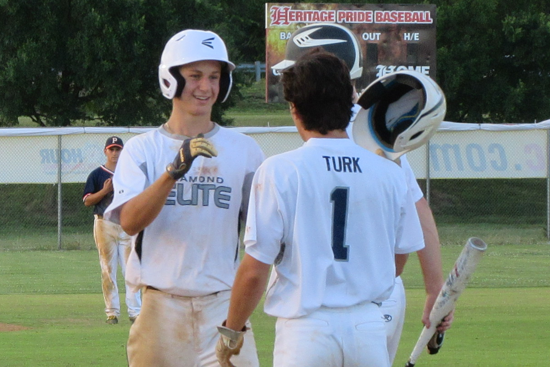 Zach Hoenig (left) hit a clutch 3-run home run in the bottom of the sixth to lift the Elite to a 5-4 win. Photo by Josh Belanger.

Zach Hoenig turned on an inside pitch and launched a three-run home run to left field in the bottom of the sixth inning to help the Diamond Elite sneak past the NOVA Premier, 5-4, last night in a Premier Showcase League (PSL) matchup at Heritage High School.

Hoenig’s blast gave the Elite a 5-1 lead at the time and vital insurance runs as the Premier would rally for three runs in the top of the seventh inning and put the trying run on second base.

“It felt good off the bat, like something I squared up. I was just happy it went out,” Hoenig said.

“He had good patience in that at-bat, took his time, picked his pitch and didn’t miss it,” added Elite coach Tom Orrell.

Earlier in the game, Xavier Ruley scored in the first inning on an error after reaching on an infield single while Nick Barenz added another run in the fifth on an RBI double for the Elite. Seven of the eleven players in the lineup for the Elite recorded a hit.

Joe Vogatsky, a James Madison University commit, started on the mound for the Elite and cruised through the first two innings with four strikeouts while left-hander Matt Weber followed with a scoreless frame in relief. Both did allow a hit.

“We had good stuff from both the right side and left side tonight,” Orrell said. “They had great [velocity] and controlled every pitch they threw, so their ability to go out and control the plate and zone really sets the tone for the rest of the game going forward because when the other team is off-balanced, it feeds our momentum on the field and hitting.”

Premier starter Ian Smith allowed one unearned run on one hit through three innings with four strikeouts. Relievers Jake Rodriguez and Brandon Kim were charged for four runs over three innings of work.

The Premier got on the board against reliever Justin Rebok after he surrendered a leadoff walk to Tom Ronis in the fourth inning. Ronis quickly stole second, advanced to third on an infield single and scored on a Phaly Moravek ground ball. Nate Spinks and Jared Smith both held the Premier scoreless in the fifth and sixth innings, combing for three strikeouts.

In the seventh, the Premier finally got the bats going with four straight hits off reliever Enrique Grijalva. Anthony Avvisato, Mike Welliver and Ben Cousino each drove in a run while Kim advanced into scoring position for the Premier. The rally ultimately came up short as Grijalvo managed consecutive fly outs to strand Kim at second base.

The Elite will play in a tournament in Richmond this weekend before playing the Bradley Eagles on Tuesday. The Premier will play next against the DC Cadets on Tuesday.