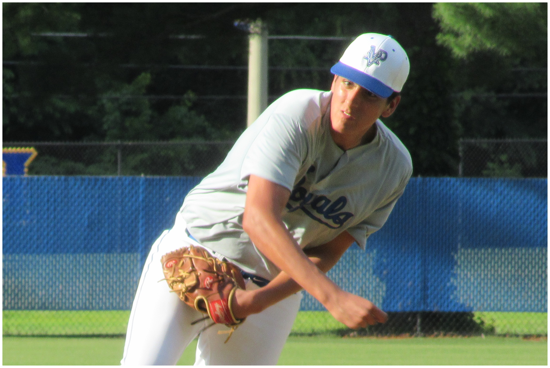 Nick Feagan struck out seven and allowed just three hits in 6.1 innings to lead the Royals to a 7-3 win. Photo by Josh Belanger.

Nick Feagan relied on his favorite pitch, his curveball, to strike out seven over 6.1 innings and help lead the MVP Royals East 2022 past the Metro Senators 2021, 7-3, last night at Robinson Secondary School.

Feagan was dominant up until the moment he loaded the bases with one out in the seventh, shutting down the Senators’ lineup with six scoreless frames. The right-hander’s ability to mix in his curveball in any count held the Senators to just three hits and one earned run before handing the ball to reliever Erik Wilkinson in the seventh.

“When you have a guy that can throw an 11-7, 12-6 curveball and throw it for strikes, we can really pitch them backwards and keep them off-balanced,” Royals coach Bill Wilkinson said.

The Royals scoring two early runs in the first inning only helped Feagan’s confidence in his curveball and allowed him to establish a rhythm with his number one weapon.

“Once we got an early lead, it always gives you more confidence as a pitcher and let’s you be more comfortable and throw more off-speed pitches and I just attacked them,” Feagan said. “I just love my curveball and I trust in it so much. It just does what it does.”

The Royals would only extend their lead, adding runs in the third and fifth innings. Jaden Kritsky and Drew Kim carried the offense as they went a combined 5-for-5 with six runs and two RBI from the first two spots in the order.

“Jaden is a spark and ignites us and Drew is such a cerebral hitter and barrels everything up, can bunt and is a great base runner, so to have those guys at the top is great,” Wilkinson said.

Charlie Slaymaker also had a solid night at the plate with a pair of run scoring singles. Wilkinson and Dominic Kim would also drive in runs for the Royals.

The Senators used a different pitcher every inning and received scoreless outings from Anthony Hernandez, Shawn Baxter and Brandon Ward. The Royals were able to get to starter Phillip Gilbert for two runs on three hits and relievers Justin Kwitchoff and Laurence Jennings for four runs (three earned) on five hits.

Feagan did not allow a hit until the fourth inning, when he allowed a two out single to Andrew Offut. The Senators finally got on the board in the seventh after Wilkinson allowed an inherited run to score on an RBI from Ward. The Royals committed errors on consecutive plays to allow two more runs to score before Wilkinson would get a fly out to end the game.

The Royals will play next against the Diamond Elite 15u on Saturday while the Senators will play in a tournament at Sports at the Beach in Delaware starting on Friday.