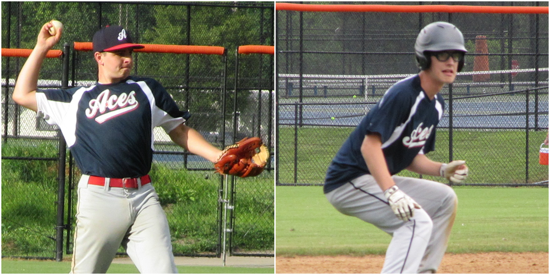 Matt Lawn sparked a five-run rally in the second inning with a two-run single that helped lead the Loudoun Aces to a 6-4 victory over the Ashburn Rebels last night at Briar Woods High School.

The Aces’ rally began with a pair of walks and a wild pitch that put runners in scoring position for Lawn. He then took an outside pitch and drove it to right field, scoring both runners. The Aces would tally three more runs in the inning on an RBI from Spencer Pomata while Lawn and Matt Yarborough each scored on wild pitches.

“Early on it was big,” Aces coach Doug Sweeney said. “[Lawn] was able to get a nice shot in the right-center gap to bring two in and from there we were able to noodle across a few more runs to get five that inning and that ended up standing up.”

With the Rebels playing their first game of the summer and the Aces preparing for a weekend tournament in Blacksburg, both teams started each inning with a new pitcher. Cole Keel and Tyler Scott started for the Aces and Rebels respectively, and each threw a scoreless first inning.

Lawn’s base hit was one of just three hits in the game for the Aces, the other two coming much later in the fifth and sixth innings. The Aces took advantage of four walks and an error in the second inning as reliever Mike Knipple struggled to find the plate, allowing five runs (four earned) in his one inning of work.

“The offensive side, we didn’t get a lot of hits but we were able to capitalize on some walks and took advantage with some stolen bases, so we were able to get the lead and keep it,” Sweeney said. “Our pitchers really did a great job keeping us in the game.”

The Rebels would chip away at the five-run deficit with an RBI triple from Matt Mizelle in the second inning and another run in the third following three hits and a balk. Riley Ashby recorded two of the Rebels’ six hits in the game from the leadoff spot, but was left stranded in scoring position both times.

The Aces tacked on another run in the fourth off Cole Rayfield as Eric Gustafson scored his second run of the game on a wild pitch. Again, it was the walks that hurt the Rebels as the Aces scored without a hit.

Free passes would then hurt the Aces in the bottom half after Gustafson allowed two runs to score after three walks. Joback eventually got the final two outs in the inning, but not before allowing an inherited run to score on a wild pitch. Joback and DeProspero would then retire the next six batters in order to save the game for the Aces.

The Aces will play next against the NOVA Premier Blue on Wednesday while the Rebels will take on the Metropolitan Senators on Tuesday.