For most of the last 10 years or so, my Mother's Day weekends have been spent at various baseball fields shuffling between three different kids' tournaments and games. This year was different. My boys are now 20, 18, and 14 years old and I have only one ball player left standing in my family.

So it was that I woke up on Mother's Day weekend this year to a very quiet house. By 10:30 am my 18 and 20 year old "boys" were still asleep and my 14 year old was in Delaware with my husband at a tournament. I decided to go for a run and about half way through passed by the neighborhood t-ball field where all three of my children each played their very first games. There are no dugouts at this particular field so I watched a team of kiddos sitting, standing, lying down, and doing head stands (as you do, of course) along the 1st baseline while five or six parents tried to corral them into a straight line to await their turn at bat.

With my second son set to graduate high school in a few weeks, I've been a little emotional lately. I mean I suppose it depends on how you define "a little" actually. I'm not sure how one would exactly classify the emotional health of a woman who stops running dead in her tracks at the t-ball field and stands on the sidewalk with tears running down her face.

Realizing that the more I stood there wiping my nose and face the closer I was to commencing into a full-on wail, I decided that perhaps I should be on my way. And for the rest of my miles, I ran along having a conversation in my head with myself . . . the self that I was about 15 years ago as I sat at that very field watching a five year old swing at the tee while I held a three year old in my lap and grew a baby in my belly. I wish I could sit down next to her today. I'd make sure she had enough saltines and ginger ale and a bag to puke in if things got bad. Then I'd tell her a few things that she doesn't realize about her next 15 years.

I am not going to say, "Don't blink" or "Time flies." I know your days are so very long that you cannot conceive that one day your house will be quiet until well after 10:00 am. I know you would laugh at the thought of having enough time alone to go for a run much less to end up standing on the edge of a t-ball field for ten minutes like some kind of freaky stalker. I can tell you this all day long and it doesn't make it easier to double knot the cleats of a squirmy little boy or to pray to Jesus that he won't touch any surface of the port-a-potty or to clean up smushed goldfish crackers out of the upholstery of your car again.

I do want to tell you to be sure you pay attention because you won't want to forget this. And the truth is that one day, even though you will find that you cannot for the life of you remember why you walked into a room and you might search high and low for your sunglasses (by the way, check the top of your own head), you will actually have memories of these days that will be so vivid that you'll feel as if you could reach out and touch them.

And you have no idea that one day in about 15 years when you're standing outside of the t-ball field the clearest memory of all will hit you like a ton of bricks. You'll remember that even though this field was only a ten minute drive from your house, each one of your little boys would fall asleep on the way home. You'll remember how you'd sit in the driveway and lay your head back and listen to one more song on the radio just to catch your breath as he slept. And then you'd carefully unbuckle his seat belt and carry him into the house, sticky Gatorade lips pressing into your neck, little cleats banging against your thighs as you huffed and puffed your way up the stairs to his bedroom. And you won't know how desperately and completely you'll want to go back to those moments for just one more night. Just one.

But's the most important thing, Self. Listen close.

Those little boys of yours are going to swing and they're going to miss. So many times. On the ball field and off. And guess what else? SO WILL YOU. You will mess up a million times. But stay in the game, Mama.  Shake it off, get back in the batter's box, and keep swinging. It's worth the tears and the dirt and the exhaustion. You're going to have more fun than you could have ever imagined. 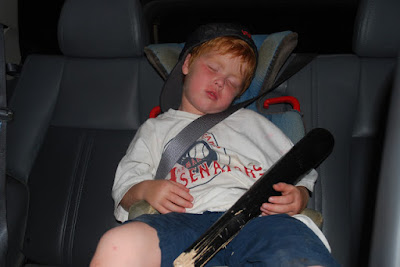