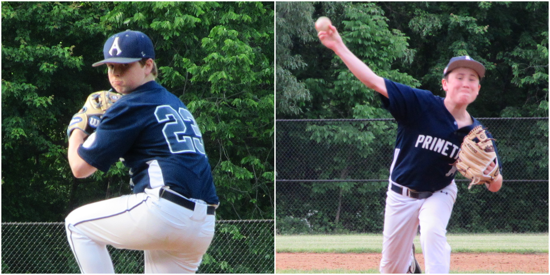 Mason Dougherty (left) and Aidan O'Brien (right) did allow a hit over four innings and combined for four strikeouts for the Aces. Photos by Josh Belanger.

Mason Dougherty, Aidan O'Brien and Andrew Church did not allow a hit over five innings while Jacob Dial drove in a pair of runs and scored three times to lead the Prime Time Aces 13u over the Metro Senators South 13u, 16-0, last night at Greenbriar Park.

The Senators' bats were completely shut down by the trio of right-handers put forth by the Aces. Dougherty and O'Brien each recorded a pair of strikeouts and walked just three men through the first four innings while Church pitched a 1-2-3 final inning. Five batters was the most any of them faced in an inning.

“We walked a couple guys in our last game and the guys took it to heart and just wanted to throw strikes,” Aces coach Andrew Sable said. “We are such a good defensive team and if we throw strikes as a team, we are going to be in a good spot and they did that today.”

Dial ignited the offense for the Aces from the lead-off spot, reaching base three times and providing the loudest hit of the night with an RBI triple that hit the fence in center field. “I just wanted to get on, but I got a piece of one and it just went. I knew it had the potential to go out,” Dial said.

He drove in his second run of the night with a productive groundout in the Aces’ final frame. Despite being one of the youngest players on the team, the Aces’ lead-off man has been a reliable feature at the top of the order all season.

“Jacob is very good player. He has great hands and wants to get better everyday, so he is has been fun to coach,” Sable said.

Senators starter Josef Miller almost escaped the first inning unscathed with a couple of strikeouts, however two walks and a hit-by-pitch ultimately were costly as an error allowed two runs to score. The right-hander was the only Senators pitcher to not allow an earned run in the game as the bullpen was charged with nine runs (eight earned) over four innings.

The Aces’ big inning came in the third when they sent 12 batters to the plate and scored seven runs on five hits. Nick Foster delivered a two-run double in the inning while Jackson Arthaud, Max Gyllenhoff and Mike Powell each had an RBI for the Aces. Powell finished the night with two doubles and two runs batted in.

Foster, Keenan Reynolds and AJ Degler each had extra-base hits en route to multi-hit games for the Aces. The Aces pounded 14 total hits in five innings and were held scoreless in only one inning.

Both teams will play next this Sunday in doubleheader action as the Aces take on the Koa Sports 13u while the Senators will face the Sandy Spring Falcons 13u.