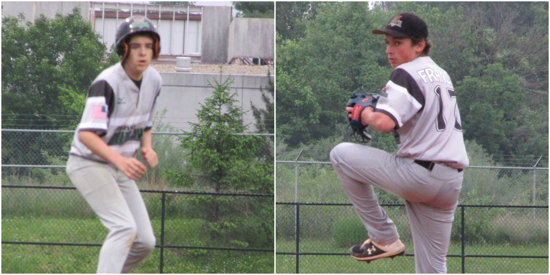 Andy Francis struck out five over four plus innings and provided three RBI at the plate to help lead the Mizuno Outlaws Black 14u to a 7-3 victory over the MVP Terps Blue 14u last night at Sully Highlands Park.

Francis retired the first seven batters of the game before allowing a hit-by-pitch and an RBI from Eddie Fong in the third inning that gave the Terps a 1-0 lead. Francis would keep it a one-score game until the fifth when he allowed a leadoff single from Jackson Coughlin that was quickly followed by an RBI double from Connor Hassan, which ended the night for Francis.

The Outlaws turned to right-handed reliever Ben Suzuki to escape the inning, however he surrendered another run on Fong’s second hit of the night to extend the Terps’ lead to 3-0 and close the book on Francis. His final line included three runs on five hits over 4.1 innings.

The Terps held the Outlaws scoreless through the first four innings, using a different pitcher every inning. Hassan started and struck out the side in the first, while Sebastian Lopez, Sam Herndon and Matt Jenks each through scoreless innings in succession.

The bats finally broke through for the Outlaws in the fifth against Fong, who found himself facing the bases loaded with no outs. After a two-run double from Zach Longo, the Outlaws tied the game on a perfectly executed safety squeeze from Charlie Djorup. Dominic Smithers then gave the Outlaws the lead with an RBI infield single with two outs.

"That’s about two and half games we didn’t hit anything, but we figured it out and started to see the confidence coming back and we started hitting again," Outlaws coach Tyler Womer said. "It’s the little things with this team like the push bunt at the end there, hit and runs and moving runners over. We are trying to stress the small parts of baseball."

Not only did the Outlaws show great execution at the plate in key situations, but also did not commit an error in the game. The defense also made a couple of great plays to throw runners out at third base and home plate that kept runs off the board for the Terps.

"Our bats were quite early but [Andy and Ben ]allowed us to hang in there," Womer said. "If they throw strikes, we will make plays."

Suzuki retired the side in order in the sixth, with help from a double play he stared on a line drive hit right back to him. Francis would then add to the Outlaws lead in the bottom half with a bases clearing, three-run single off Will White, the Terps’ sixth pitcher of the night. The game ended in the bottom of the sixth with the home team leading after the time limit surpassed.

The Outlaws will play next against the YBA Hustle this Saturday while the Terps will take on the SBA Bucks on Sunday.