14u: Premier’s Pitching Trio Ks 12 In Win Over Cadets 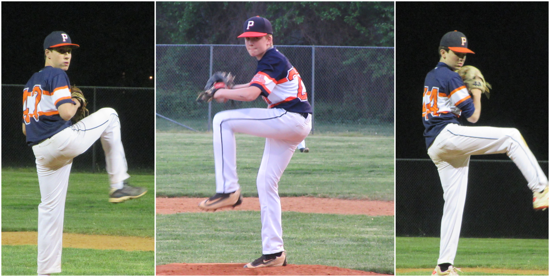 Left to Right: Mason Yokum, Chandler Valbak and Corey Costello combined for 12 strikeouts in a 8-2 win for the Premier. Photos by Josh Belanger.

Chandler Valbak, Mason Yokum and Corey Costello combined for 12 strikeouts over six innings to lead the NOVA Premier 14u to an 8-2 victory over the Cadets Prime 14u last night at Lewinsville Park.

Valbak started on the mound for the Premier and struck three over three scoreless innings, allowing two hits. The right-hander then supported his cause in the bottom of the third with an RBI double that scored John Ryan. Cadets started Ben Jones allowed one run on four hits over three innings with three strikeouts.

“Chandler is a bulldog for us. He is a guy that doesn’t throw hard but when you put him out on the mound, he is pumping strikes,” Premier coach Eddie Kim said. “He is a guy that puts us in a good position to win every night he is out there.”

In the fourth, both teams went to their bullpen as the Cadets turned to right-hander Aidan Han while the Premier brought in the lefty Yokum. Han struggled with his command and allowed three hits and a pair of walks, including an two-run single from Costello and an RBI from Jack Holland to give the Premier a 5-0 lead.

The Cadets appeared to have an immediate answer in the bottom half with a lead-off double from Quinn Evans, however would be shut down as Yokum proceeded to strike out the side. The Premier grabbed a couple more unearned runs in the fifth off reliever Loudin Rodriguez, who struck out the side but a throwing error on a dropped third strike with two outs continued the inning and allowed the Premier to add to their lead.

The Premier would add one more run in the sixth on the second RBI from Holland, finishing the night 2-for-3. Costello also went 2-for-3 with a pair of RBI in the game for the Premier. After being held scoreless in the first two innings, the Premier opened up for eight runs on nine hits over the final four frames.

“We did a great job with our two-strike approach tonight," Kim said. "You have to go up and compete with two strikes and I thought we did a good job of that tonight as well as putting balls in play. When you put balls in play, good things happen.”

Costello, who entered the game in the fifth inning, ran into trouble in the bottom of the sixth after loading the bases with no outs. A timely mound visit from coach Eddie Kim allowed Costello to refocus and limit the damage to two runs as he picked up his sixth strikeout in two innings.

"He was starting to overthrow a bit and and in that situation when we were up eight, I told him to dial it back a little and get back in the zone and to me he did a heck of a job of that." Kim said. "We talk about damage control in that situation with the bases loaded and no outs and for us to come out only giving them two. He did a heck of a job in terms of competing and finishing it off strong for us.”

The Premier will play next against the Loudoun South Eagles on Saturday while the Cadets will face the MVP Terps Elite on May 9.