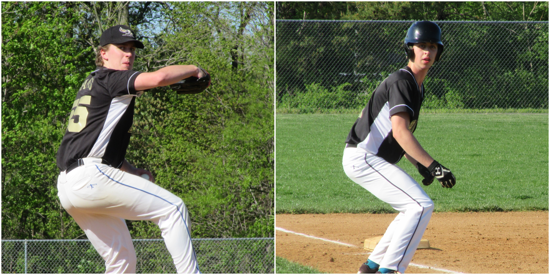 Will Sams (left) earned the win and Everett Heim (right) recorded the save while both combined to drive in 3 runs for the Hawks. Photos by Josh Belanger.

Will Sams and Everett Heim combined for three RBI and three runs scored at the plate while also pairing on the mound to earn the win and the save respectively to lead the Fairfax Hawks over the NOVA Lions, 8-5, in a home-school varsity matchup yesterday at Hooes Road Park.

The Lions grabbed an early lead off Sams after Matt Bouchard drove in Baker Stewart, who led off the game with a double. Stewart got things started again in the third with another double, which was followed by back-to-back RBI doubles from AJ Mathwin and Bouchard. The Lions later took a 4-0 lead following a sacrifice bunt from Spencer Cates that allowed Bouchard to score.

The Hawks were shutout in the first two innings by Cates, who started on the mound for the Lions, but were quick to tie the game with four runs in the third off reliever Gabriela Celona. Sams and Dolan Nethercutt each drove in a run while the Hawks scored two more runs on an error and pass ball in the inning.

Cates did not allow a hit while striking out four over two innings, however his effort could not be matched by the bullpen. The Lions’ bullpen allowed 12 free passes via walks and hit batsmen and was charged with eight runs (seven earned) over four innings.

In the fourth, Zach Day led off with a triple and later scored on a base hit from Heim to give the Hawks the lead. Heim drove in another run again the following inning after Vinny Lampasona launched a triple that hit the top of the fence in center field. Matt Geier would give the Hawks their eighth run of the ball game after drawing a bases loaded walk.

“Our guys started to have better at-bats,” Hawks coach Scott Nethercutt said. “We started to come back when we settled down and started to play better baseball and hitting pitches that were over the plate."

Bouchard would bring the Lions one run closer in the fifth with a solo shot to left field against Heim, who came on in relief. Bouchard finished the day 3-for-3 with three RBI and pair of runs while also pitching a couple of innings in relief. Despite out hitting the Hawks, the 11 total walks issued and three errors defensively were too much for the Lions to overcome.

Heim settled in after the home run, retiring seven of the final nine batters he faced to record the save. Sams and Heim allowed just one walk combined while their defense committed just one error behind them.

“That's what we talk about as a team, throwing strikes and challenging the hitters,” Nethercutt said. “The way we hurt ourselves is through walking batters and making errors. If we can keep away from doing those things we are going to win most of our games.”

The Lions will continue their varsity schedule with a game Thursday against Quantico HS while the Hawks will play next against the Southern Maryland Christian Academy on Friday.