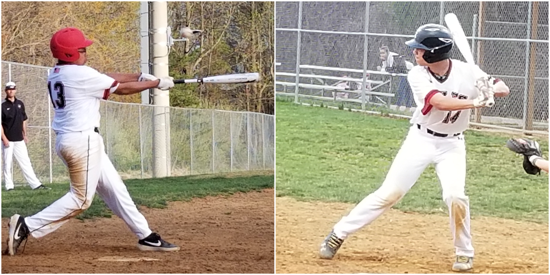 Clint Burke (left) and RJ Carenates (right) helped lead the Eagles to a 4-3 win over the Sluggers. Photos by Josh Belanger.

Clint Burke provided the game-winning RBI in the bottom of the seventh inning, hitting a deep sacrifice fly to left field that scored pinch-runner Eric Gomez to lead the Bradley Eagles 13u over the Annandale Sluggers 13u, 4-3, last night at Nottoway Park.

Burke hit the ball hard all three times he stepped to the plate, going 2-for-3 with a pair of RBI and runs scored. After a base hit in his first at-bat, Burke ripped an RBI double over the left fielders’ head that tied the game at 2-2. He had a similar result in his final at-bat, finding contact on a 3-2 pitch to win the game for the Eagles.

“In his last five or six at-bats, [Clint] has been connected at the plate and has hit the ball as hard as anyone on our team,” Eagles coach Andy Bradley said. “It’s always nice to see those adjustments and I’m really happy to see the way he is swinging the bat. I think he’s got a big season in front of him.”

AJ Murray started on the mound for the Eagles and struck out four over three shutout innings, allowing just two hits while walking none. Murray would also later drive in Burke to give the Eagles a 3-2 lead in the fourth.

Sluggers starting pitcher Jamie Laskofski also showed suburb control in his outing with just one walk over six innings. The right-hander was hit with the no decision after he limited the Eagles to three runs on three hits. He also went 1-for-3 at the plate with a run scored for the Sluggers.

“It was just a clean game from both teams,” Bradley said. “I was telling our guys the guy that impressed me the most was their pitcher and the way he pumped the zone. He had two innings with less than 10 pitches and fielded his position real well. Our pitchers had the same idea and pitched the ball over the plate and pitched to contact.”

Jake Drumm delivered the first lead for the Sluggers with a two-run double in the fourth off Eagles reliever Jordan Sim. The Sluggers would again rally in the sixth, tying the game on an RBI from Bryce Williams after Gavin Keller led off with a base hit, however would have the go-ahead runner thrown out at the plate on an attempted first and third play.

Patrick DeYoe came on after Sim allowed three runs over thee innings to record the final three outs. The right-hander showed poise as he faced runners in scoring position with one out, but induced a couple of fly ball outs and kept the game knotted at 3-3 in the seventh.

“We had a few walks but I was happy the way our guys were aggressive in the zone and our defense played well,” Bradley said. “That could have been a crooked number type of inning if we didn’t make those plays.”

Reliever Jalen Hoffman would take the mound for the Sluggers in the seventh and made a crucial mistake to walk catcher RJ Carenates to start the inning. Gomez, who became a courtesy runner for the catcher, stole second and later advanced to third on a wild pitch to set up Burke for the walk-off opportunity.

The Eagles will be in action next against the NOVA Vipers on Saturday while the Sluggers will play the Arsenal on Tuesday, April 23.