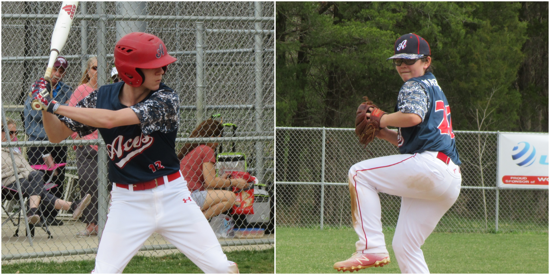 Jack Beard (left) and Orion Marshall (right) combined for 7 RBI while striking out a combined 5 over 4 innings in a 22-18 win. Photos by Josh Belanger.

Jack Beard and Orion Marshall combined for six hits and seven RBI for the Loudoun Aces Blue 12u in a 22-18 win over the Mount Vernon Patriots 12u yesterday in a game that had 12 extra-base hits and 32 combined hits in five innings at McNaughton Park.

The Aces came out swinging, scoring eight runs in the first three innings with Beard and Marshall each driving in a pair of runs. The Patriots would answer with five of their own through the first three frames, highlighted by a three-run double from Hudson Grimsley in the third.

Trailing 9-6 in the fourth inning, Tyler Orth smashed a grand slam that landed in the trees over the left field fence to give the Patriots their first lead of the game. Grimsley would later follow with his fourth RBI of the game to make it a 12-9 ballgame.

“For our team, the important part was the resiliency we showed,” Aces coach Wayne Griffin said. “We controlled most of the game, but the guys on the other side fought to come right back. I brought the team in and said, ‘Now is the time. You have to answer.’ They did in a big way.”

“The guys on the bottom of the order aren’t big power guys but they work hard to get on-base and when they do, it really sets up that middle of the order well,” Griffin said. “The [middle of our lineup] really take pride in driving in runs and they crave those RBI opportunities.”

Marshall started on the mound for the Aces and struck out three over 2.2 innings. Beard, who came on in relief of Owen Brundage in the fourth inning, recorded the final four outs of the game with a pair of strikeouts.

Gizzarelli, Grimsley and Orth provided most of the firepower for the Patriots with a combined 12 RBI. Quinn Snyder and Logan Schmauder also drove in a pair of runs while Justice Lambert, Ben Reid and Ryan Chicoine combined for six runs for the Patriots.

The Aces swept both games of the doubleheader with a 7-4 victory in game two. Both teams will be back in action next on Sunday with the Aces taking on the West Virginia Wild and the Patriots playing the Burke Bulldogs.