NVTBL's injury prevention blog will highlight common baseball injuries and include exercises to decrease the chances of sustaining those injuries. Blogs will be written by Seth Blee, who is a Doctor of Physical Therapy. Blee runs the physical therapy side of Inova’s Sports Medicine Program and is the Physical Therapist for the Washington Nationals. He is also a former coach with the NVTBL and is on the Pro Advisory committee. Click here for more info on Seth Blee. 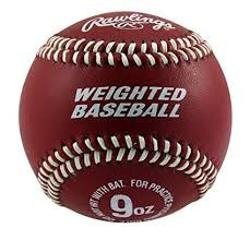 For this edition of the injury prevention blog, I wanted to address one of the most common questions that I hear when I speak with coaches, players, and parents.  I am often asked:

This is a topic that has been debated by physical therapists, athletic trainers, strength trainers, and pitching coaches for years.  There have been several research articles written about the topic, the most recent of which, the “Effect of a 6-week weighted baseball throwing program on pitch velocity, pitching arm biomechanics, passive range of motion, and injury rates”, written by Mike Reinold, PT, DPT and Dr James Andrews sheds some interesting light on the subject.

Since all players are desperately trying to throw harder, there are many programs, web sites, and theories out there that have tried to find the secret.  One such theory is that throwing a heavier ball will strengthen the arm and then allow the player to throw a standard weight baseball even harder.  The research on this has been mixed at best.  This recent study cited above compared 2 groups of teenager baseball players that threw weighted balls in addition to strengthening and routine baseball activities with another that threw only standard weight baseballs.

The key results were that the weighted ball group had:

So what does this all mean? The percent of players that increased their velocity with weighted balls over the control group (13%) was less than the number of players who were injured with the weighted ball program.

So how does a player throw harder?  The answer is to learn to better use the entire body.  The legs produce the force, the trunk transfers the force, and the arm just delivers the ball.  Therefore, the stronger the lower half and the more stable the trunk and core, the harder that a player will throw.  There is no secret weapon out there that substitutes for a stronger kinetic chain and proper throwing mechanics.  In addition, some of the tools that players use may actually lead to an increased risk of injury.

For questions or comments or to submit requests for other topics, please email SportsPT@inova.org